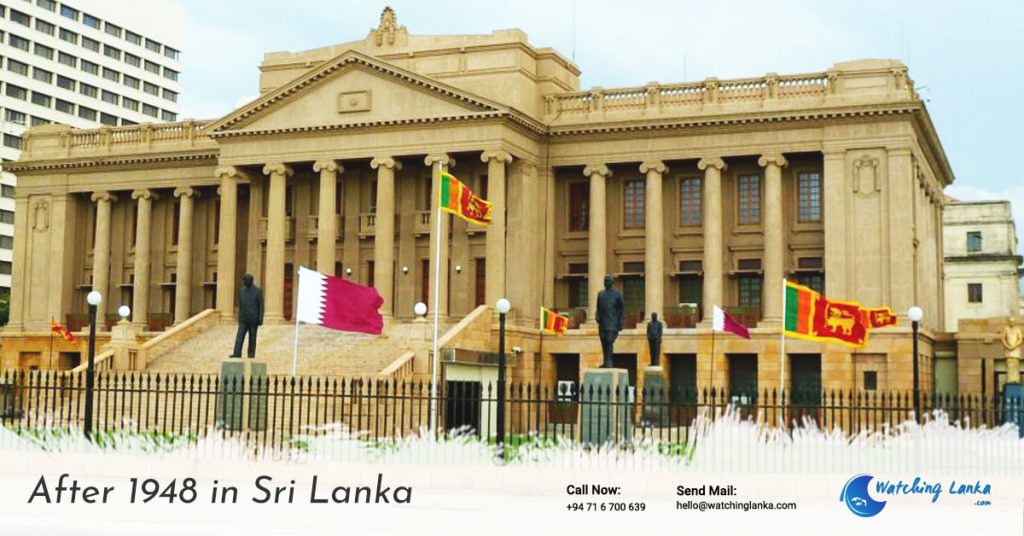 Ceylon (Sri Lanka) was an independent country in the Commonwealth of Nations that shared a monarch with several sovereign countries. In 1948, the British Colony of Ceylon was granted independence as Ceylon. In 1972, the country became a republic within the Commonwealth, and its name was changed to Sri Lanka. It was an island country in South Asia, located about 31 kilometers off the southern coast of India. Actual independence for the dominion of Ceylon came on Feb. 4, 1948, when the constitution of 1947 went into effect. A prime minister and his cabinet, chosen from the largest political group in the legislature, held collective responsibility for executive functions. The governor-general, as head of state, represented the British monarch who was responsible not to London, but to the monarch of Ceylon, the local government, and the local parliament. If you visit Sri Lanka, you can know every detail about the Sri Lankan history after the independence movement by the many sources of information.

The history of Sri Lanka from 1948 to present is marked by the independence of the country through to Dominion and becoming a Republic. Government Sri Lanka consists of a Senate and a House of Representatives. The constitution of Ceylon created a parliamentary democracy with the popularly elected House indirectly naming the Senate. The head of state was the British monarch, represented by a predominantly ceremonial figure, the Governor General. The head of government was the prime minister, and he and his cabinet consisted of the largest political party in the legislature. The President of Sri Lanka is the elected head of state and the head of government. The President is a dominant political figure in Sri Lanka. The first President of Sri Lanka was Sir. William Gopallwa. (1972)

Don Senanayake became the first Prime Minister of Ceylon. Under S.W.R.D. Bandaranaike the country became a republic, the Free Sovereign and the Independent Republic of Sri Lanka, the Senate was abolished and Sinhala was established as the official language, with Tamil as a second language. He replaced English with Sinhalese as the official language. And also it made Sinhalese the language taught in schools and universities. This caused Tamil riots, as they spoke the Tamil language and it had not been recognized as an official language. These riots culminated in the assassination of the Prime Minister, Bandaranaike. His widow, Sirimavo Bandaranaike, succeeded her husband as leader of the SLFP and was elected as the world’s first female prime minister. D.S. Senanayake, had served as a prime minister after his father’s death. Senanayake’s government enjoyed a five-year term of office, during which it encouraged private enterprise and made an effort to extend agricultural productivity. In 1957 British bases were removed and Ceylon officially became a “non-aligned” country. Language and religion had become less important as political issues. An economic crisis caused by increasing unemployment, the rising cost of living, an acute shortage of consumer goods, and the failure of state enterprise in industry and trade.

The economy of Ceylon was mainly agriculture-based, with key exports consisting of tea, rubber, and coconuts. These did well in the foreign markets, accounting for 90% of the export share by value. Nevertheless, the country began to face economic difficulties. As 200,000 tons of tea being shipped internationally annually, the title welcome to Sri Lanka with the world’s leading exporter of tea. Additionally, and the expanded school system produced a large number of educated persons who could not find employment. A rapidly increasing population and the free import of consumer goods swiftly ate into earnings from foreign trade. The falling price of Ceylon’s rubber and tea and the increase in the price of imported food added to the acute foreign exchange problem.

In July 1983 communal riots took place due to the ambush and killing of 13 Sri Lankan Army soldiers by the Tamil Tigers. Using the voter’s list which contained the exact addresses of Tamils, the Tamil community faced a backlash from Sinhalese rioters including the destruction of shops, homes and savage beatings. Also, around 18,000 Tamil homes and 5,000 homes were destroyed, with 150,000 leaving the country. Many rulers tried to drag wars against them, with the military unable to defeat the separatists and the government opposed to negotiations. By defeating LTTE’s leader, Velupillai Prabhakaran, under the excellent supervision of the president Mr.Mahinda Rajapaksha and the efforts of Military forces, finally Sri Lankan government declared total victory on Monday, 18 May 2009 Following the LTTE’s defeat, Sri Lanka, emerging after a 26-year war, has become one of the fastest growing economies of the world. As Sri Lanka is now the fully independent country, visitors from all over the world tour Sri Lanka to witness the beautiful natural creatures in the island and travel to Sri Lanka in everywhere with the full of freedom.