Bellanwila Rajamaha Viharaya is a Buddhist temple situated in the suburbs of Colombo in the village of Bellanwila, just 3 kilometers away from the city limits. Located near Dehiwala – Maharagama road, the temple attracts hundreds of devotees daily and is famous for its annual Esala Perahera festival which usually takes place in August or September. A scenic location, originally surrounded by green fields, this powerful enchanting temple is among the oldest, dating back to the Anuradhapura period.

One of the most venerated Buddhist temples in Sri Lanka, many devotees flock to worship the sacred Bo tree of Bellanwila Rajamaha Vihara, which is considered to be one of the first offshoots of Jaya Sri Maha Bodhi in Anuradhapura, Sri Lanka. It has a long and hallowed history due to the narrative surrounding the origins of the sacred Bodhi tree in the precincts of the temple. According to the Sinhala Bodhiwamsaya, one of the early chronicles, this Bodhi tree is one of the 32 saplings that had sprouted from the sacred Bodhi tree at Anuradhapura planted in the 3rd century BC. It is believed that these saplings had been distributed at least 2000 years ago, making the Bodhi tree at the Bellanwila Temple even more sacrosanct. The Bo tree at Anuradhapura is said to have come from the tree under which Lord Buddha sat and attained enlightenment, which is why these Bo trees have such significance. As well as the sacred tree, Bellanwila houses elaborate statues of Buddha and frescoes depicting the life of Buddha from birth to enlightenment.

When examining the history of Bellanwila Rajamaha Viharaya, it has been classified into 3 phases. The period associated with the planting of the Sri Maha Bodhi during the Anuradhapura period is the first phase. The second phase begins with the reign of Sri Sangabodhi Parakramabahu of Sri Jayawardenapura Kotte, a generous supporter of Buddhism, who patronized the temples of the area. The third or the modern era begins with the re-discovery of the temple by the Thera Thengodagedara after the dark ages after the Portuguese conquest. This sacred place was abandoned after the Portuguese invasion of the country’s coastal areas. It was rediscovered by an adventurous monk known as Thengodagedara Hamuduruwo, who is said to be the founder of Galauda Viharaya. I’m 1850, the thero came to discover that this was one of the thirty-two saplings from the sacred Bodhi-tree at Anuradhapura. With the help of villagers, Thengodagedara thero cleared the land around the tree and built a modest shelter for monks. With this modest and mysterious beginning, Bellanwila began to attract the attention of Buddhist devotees in the neighborhood. 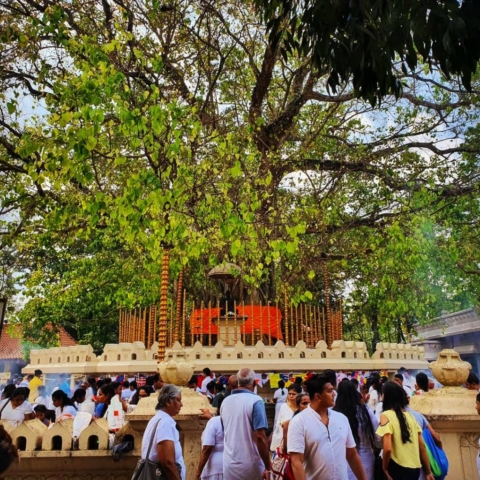 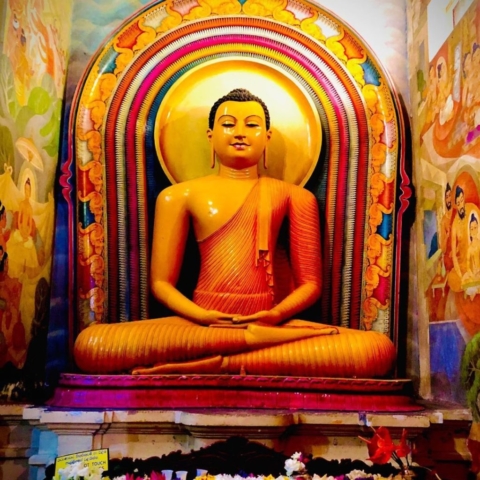 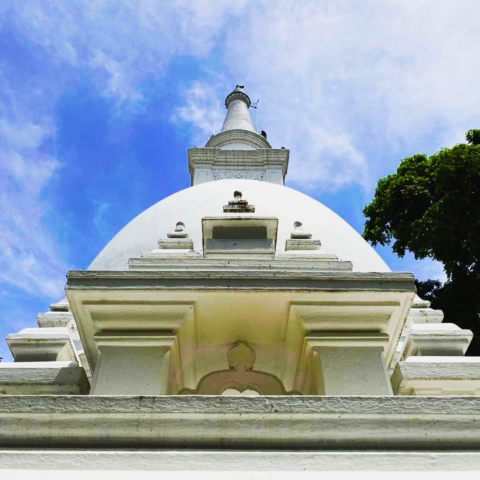 The massive temple plays a vital role in the life of every Sri Lankan Buddhist bringing into focus its miraculous powers. The main Vihara geya resembling Polonnaruwa architecture which houses the majestic standing Buddha statue, very similar to that of the Avukana statue. As you enter, the most impressive sculpture is the standing image surrounded by Buddhist statues of different postures. Exquisite paintings adorning every wall inside, depicting various events of the life of the Buddha and illustrating the history of the temple. In the center outside is the Bell-shaped Dagoba though not very large, stands as a monumental tribute for the devotees to worship and gain merit.

At the temple premises, there is the building that houses the deities of Vishnu, Eeshwara, and Ganeshwara. Behind this, is the most venerated, historic Bodhiya with its outspreading branches as if it is bestowing compassion, loving-kindness, and patience to its worshippers.