The cocoa tree is thought to have originated in the Amazon Basin and spread to Central America, especially Mexico. It was used by the natives of the region and was considered the “food of the gods.” Cocoa beans are said to have been used by the Aztecs as currency and they also enjoyed a bitter chocolate drink. Cocoa, which was introduced to Sri Lanka by the Europeans during the colonial period, has now expanded into a commercial crop in Sri Lanka. Cocoa, which is used as a raw material for food, is also grown as a by-product in crops such as coconut and rubber.

Cocoa is not an all type of climate-tolerant crop. It has more favorable climatic conditions. Areas up to 600 m above sea level are best for growing cocoa. Also, a temperature range of 24-27 degrees Celsius is more suitable. But the ideal temperature range for this crop is between 21-32 degrees Celsius. Cocoa plantations are abundant in the Central, North Western, Sabaragamuwa, Uva, Western and Southern Provinces. Cocoa is cultivated as a single crop and as an intercrop with other crops such as coconut and rubber as it has suitable characteristics for cocoa cultivation in the above areas. At present more than 1800 hectares of cocoa land is found in our country. The highest area of ​​cocoa is found in Kandy, Badulla, Matale, Kurunegala, Kegalle, and Moneragala districts. 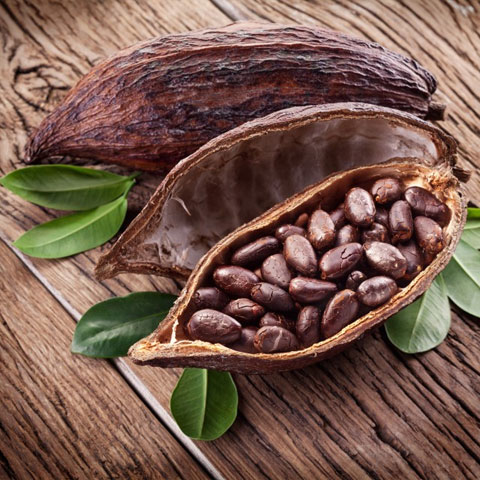 Cocoa is largely processed into chocolate and cocoa products, using a wide range of intermediate products such as cocoa liqueur, cocoa butter, cocoa cake, and raw cocoa powder. The bulk of the tropical and Asian markets is compound chocolates. Cocoa powder is essentially used in the manufacture of flavored biscuits, ice cream, and many other dairy products, beverages, cakes, and confectionery for frozen desserts. It is also used in the beverage industry. Cocoa butter is used in the manufacture of chocolate, soaps, cosmetics, and medicinal products. In some countries, the cocoa pulp is used for fermentation and industrial alcohol production, and alcoholic beverages such as brandy and wine are used. The pod husks are used in the preparation of animal feed.