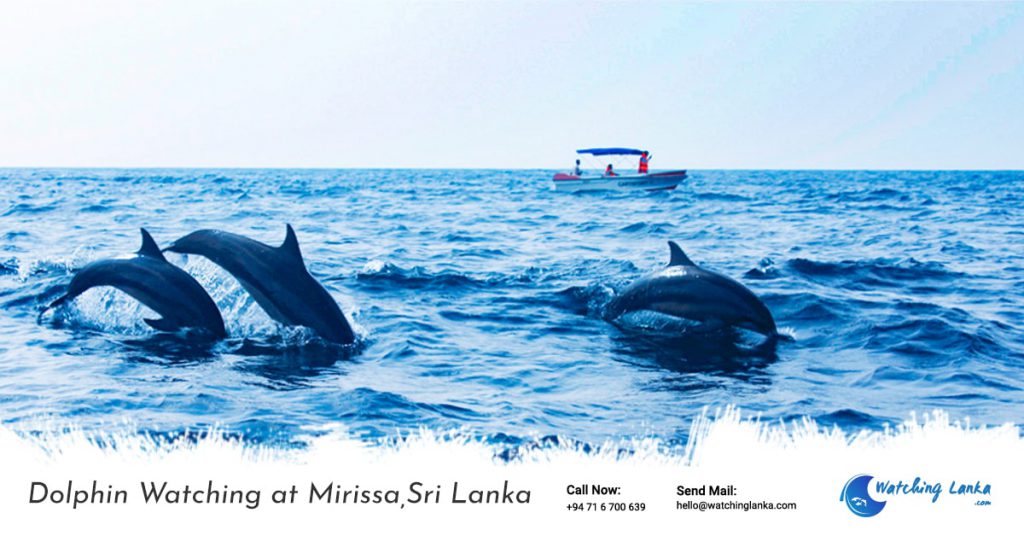 Ancient maps are evidence enough way back in the history of the presence of Whales and Dolphins in the seas off the south coast of Sri Lanka. Pods of dolphins also can be seen accompanying boats frequently during the whale watching season in Mirissa. Especially don’t miss the opportunity to visit the amazing dolphin-watching zone at Mirissa.

The private boat services with the best trip advising guides take tourists out to view Blue and Sperm Whales and many varieties of dolphins especially spinners and also other marine species. Here is a rare opportunity to experience the thrill of being close and connected with the wondrous and highly intelligent inhabitants of our oceans. Happily, Sri Lanka joined the “Indian Ocean Whale sanctuary” in 1979, so these amazing creatures are safe and well-protected in these welcoming waters.

The best place to capture whales is in Mirissa, which is situated in Sri Lanka’s south coast, famous for whale and dolphin watching. The waters around Mirissa are particularly rich in plancton (a group of microorganisms whales and dolphins feed on), which lead scientists to believe there is a resident population always present which will result in sightings whenever conditions are good, particularly between November to April.

Several types of Dolphins, whales and other marine species can be seen at whale watching spreading zone during your trip. Spinner dolphins, Bottled nosed dolphins, and Riso dolphins are the various dolphin types you can see. Killer whales, Sperm whales, Bride whales and Pigmy killer whales are the different kind’s whales can be seen during whale watching Mirissa. And also Green back turtle, Whale shark, Flying fish and Tuna fish are other marine species can be seen in some days.

What to Know About Dolphin

Dolphins are a widely distributed and diverse group of aquatic mammals. Dolphins range in size from 1.7m to 9.5 m in length and 50kg to 10 tons in weight. They have streamlined bodies and two limbs that are modified into flippers. Some dolphins can travel at 55.5km/h.

Dolphins are often regarded as one of Earth’s most intelligent animals, though it is hard to say just how intelligent. Compared to other species dolphins are much more socialized animals and they share a strong relationship with the human beings.

WatchingLanka gives you so much to offer and many wonderful experiences. So, especially don’t miss the opportunity to get all these memos at amazing whale watching ocean zone at Mirissa, Sri Lanka. You can arrange all the transport and a range of accommodation to ensure your adventure lives up to expectations in Mirissa whale watching zone.