Gangaramaya is one of the oldest Buddhist temples in Colombo, started by the famous scholar-monk Hikkaduwe Sri Sumangala Nayaka Thero in the late 19th Century. The 120-year-old Gangaramaya is not a typical Sri Lankan temple, situated in the bustling inner-city Colombo, nearby the scenic Beira Lake. The temple houses a museum that displays a collection of artifacts and other objects of a religious, cultural, and historical valued range of ageless treasures from ancient Sri Lanka as well as around the globe.

After the Venerable Sri Sumangala, his chief pupil Devundera Sri Jinaratana Nayake Thera took on the administration of the temple. It was he who laid the foundation to convert the little temple to an institute of international reckoning. The area that was once a swamp beside the Beira Lake, has now turned to be an iconic religious complex. Earlier, devotees had to cross the Beira Lake on a boat to reach the then small temple which was converted to what is today. This intriguing temple complex is now a hugely popular tourist attraction, a place of worship and learning, and a vocational training center. The best time to visit the temple is during Nawam, Vesak & Poson (February, May & June) months to witness the Nawam Perahera, Vesak celebrations, and Poson Celebrations, where the whole area gets decorated with colorful lights, lanterns, and decorations.

The temple’s architecture demonstrates an eclectic mix of Sri Lankan, Thai, Indian, and Chinese architecture. This Buddhist temple includes several imposing buildings and is situated not far from the placid waters of Beira Lake on a plot of land that was originally a small hermitage on a piece of marshy land. Two medium-height golden Buddha statues stand like sentinels at the door leading to the main sanctuary of the temple. It has the main features of a Vihara (temple), the Cetiya (Pagoda) Bodhi Tree, the Vihara Mandiraya, Seema Malaka (assembly hall for monks), and the Relic Chamber. The ceilings of the buildings are enchantingly decorated with vibrant pastel paintings depicting Buddhist stories. 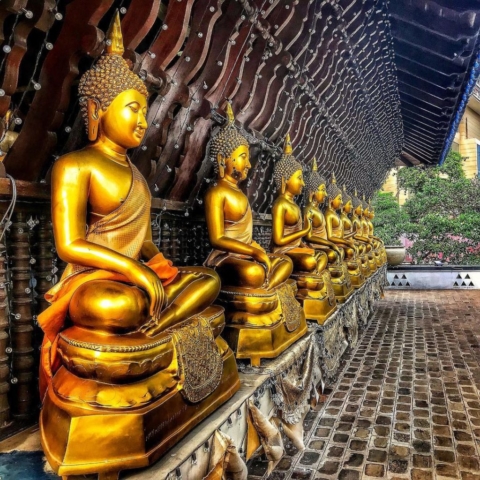 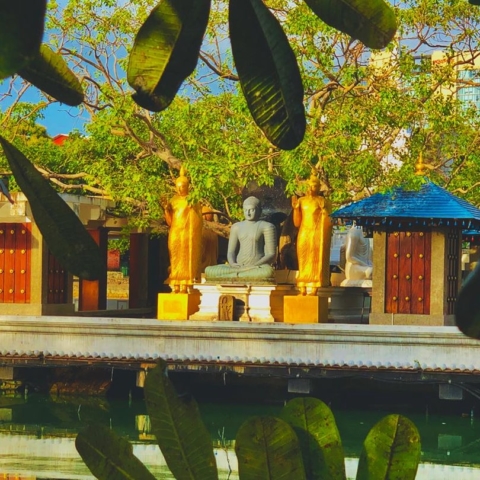 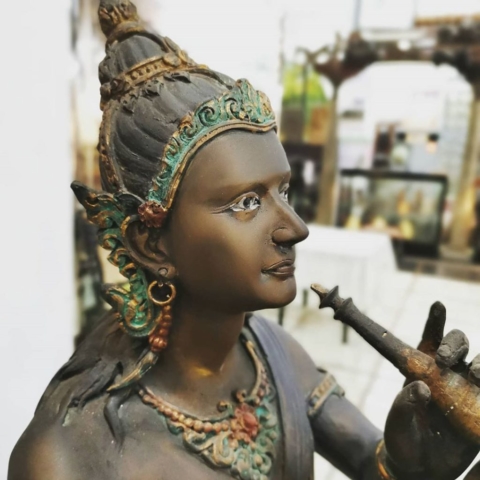 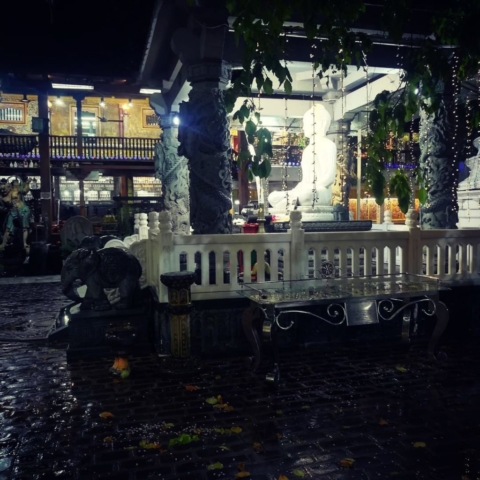 Besides, a museum, a library, a residential hall, a three-storeyed Pirivena, educational halls, and an alms hall are also on the premises. The Bodhi tree and the courtyard of the coral-white stupa are excellent places to bask in serenity. Most notable for tourists is the architecture of the Simamalaka Shrine, which was built with donations from a Muslim sponsor to the design of Geoffrey Bawa. Rather than huge, open spaces and tranquility, expect huge collections of fascinating artifacts and crowds at Gangaramaya. The temple is mostly celebrated for its lavish architecture and statues showcasing Sri Lankan, Chinese, Thai, Burmese, and many other artistic styles. The exterior of the temple is boldly decorated in elaborate designs and golden adornments. The temple grounds are black slate tiled, with various statues of Buddha, lion, nymph and china vases placed randomly.

The Gangaramaya Navam Perahera is one of the grandest festivals of the temple which dates back to the 1970s. It held annually in February, displaying the rich religious and cultural tradition of Sri Lanka, yet some had foreseen that a pageant like this would provide relief from the bleak spirit. It is quite a fascinating sight that hundreds of elephants nicely adorned with elegant costume walk with pride and dignity carrying the casket of the sacred relics while many troupes of traditional drummers, flutist, dancers, and other traditional performers and hundreds of Buddhist monks clad in colorful robes, parade in the Perahera. The Perahera attracts thousands of people not only from the whole island but also beyond the ocean as it is popular throughout the world.