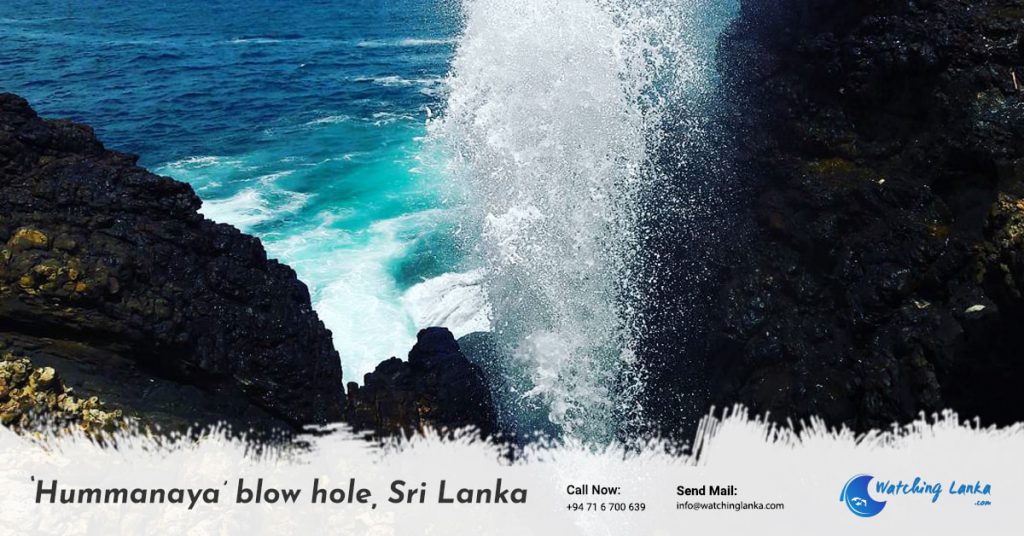 Hummanaya Blowhole is the only known blowhole in Sri Lanka and it is considered to be the second largest blowhole in the world. It is a well-known attraction in the Deep South of the country and it certainly lives up to expectations. The Hummanaya Blowhole is located 1.1 kilometers from the small fishing village of Kudawella, which is 12 km from Tangalle, in the Southern Province. The name Hummanaya has evolved from the words “Hoo” and “Manaya” over the time. In Sinhala, the word “Hoo” refers to the sound generated from the blowhole. The word “Manaya” has the meaning of dimension or measurement. Together these words “hoo-manaya” means the distance that the sound of blowhole can be heard. Even from far away, one can hear the sounds of the blowhole.

About Kudawella:
This wonderful, rare geological formation of nature is situated at the southern coastal village in Sri Lanka named Kudawella. The Kudawella village name means small beach, it was unfortunately very badly hit in the Tsunami in 2004. It also newly constructed fishery harbor which is control under Ceylon Fishery Harbours Corporation. The harbor situated in close proximity to a very famous place among the local and foreign tourists, Hummanaya Blowhole. Kudawella fishery harbor in attracting a significant number of boats due to a new harbor and its large basin area. Kudawella has none of the more facilities that are available at the Tangalle Fishery Harbour.

The amazing Blowhole in the world occurs when the tide fills underwater caverns with seawater. The caverns are caused by a geological process of shoreline erosion. This can happen through ‘hydraulic action’ where the waves cause pressure on the air pockets within the little cracks in the cliff, widening them further; ‘abrasion’ caused by the waves bashing rocks, pebbles, sand and other material into the cliff; chemical weathering caused by the acid content in seawater, especially lethal to rock compositions such as limestone; and ‘attrition’, a sandpapering effect caused by small loose circular rock debris. If the caverns have an aboveground opening; the pressure causes the water to push out periodically in a fountain, or ‘blow’. The timing and height of the water fountains from these blowholes are dependent on the tides and wave formations. This is how Hummanaya blow makes.

The blowhole itself is a natural crack in the rocks, and when the wind blows in the right direction the water shoots up the cliff and into the air the water shouted up above the cliffs in the monsoon seasons more than 30 M. The first part of the name Hoo-maniya comes from the whooshing sound of the water volume of seawater whistle through a natural fine hole from beneath a massive rock in the sea. Located on a rock about 40 feet above sea level. This beauty of Kudawella is most probably world the highest blowhole.

Hummanaya can be reached by crossing over a tombolo; a piece of land that is created when deposition of sand or gravel occurs, connecting an island to the mainland. This blowhole has achieved fame amongst visitors to the island, as it is believed to the second largest blowhole around the world. Named after the strong humming sound that it produces while active; Hummanaya Blowhole can shoot up to a height between 25 – 30m. Usually, every 10-15 minutes can see water comes up from the hole with amazing spray. Most of the evening the pressure is come up with changing the tidal waves. Even in monsoon seasons the pressure increase and water come with a huge height. It is uncommon blowhole in the world by enjoying the surroundings with picturesque and spending a few hours can be captured many great views. Well, the blowhole is most active when the seas are at their strongest time. That would be the peak of the south-west monsoon period.

The Hummanya blowhole is a creation of Mother Nature which could attract many tourists on a large scale. And also it is a famous tourist attraction place in the Deep South of the country and it certainly lives up to expectations. Seeing the beauty of Hummanaya blowhole definitely is an exhilarating experience and one that shouldn’t be missed.