Sri Lanka is one of the tropical island nations situated in Southern Asia. It is also commended as a top tourist destination in the world. Visitors from all over the world have been attracted towards the island for its beauty, history, and culture. Among the memorable experiences encountered here is the abiding taste of its exquisite natural drink, king coconut. The King Coconut water is the favorite beverage of the Sri Lankans, which is becoming increasingly popular with the tourists.

The king coconuts, locally called ‘thambili’ are a bright-orange colored variety of coconuts which are indigenous to Sri Lanka. Sweeter than regular coconuts, there are several sub-varieties of the king coconut-the most common being the &quot;red dwarf&quot; (kaha thambili, commonly referred to as gon thambili). The other variety is”ran thambili&quot”, a smaller variety containing about forty nuts in a bunch. The king coconut tree is shorter than coconut trees. The main constituents of the king coconut water are easily digestible sugars, minerals and vitamins. These are extensively found throughout the country especially on the beaches and roadside kiosks which are in plenty during the dry, hot summer months.

Sri Lanka is increasingly becoming a preferred getaway while food and drinks in Sri Lanka are also yet another attraction that draws tourists from outside the country. And the king coconut is the prime favorite. Tourists make it a point to stop at king coconut roadside vendors and relish the drink. For centuries in Sri Lankan history, from kings to the common man King Coconut water has been a major drink of choice. Its natural sweet flavor is the perfect thirst quencher for life in the tropics. King Coconut, is short in stature and commonly found in Sri Lanka, and the nuts of which Sri Lankans regard as a ‘living pharmacy’ is the most versatile and medically practical form of the coconut plant available. King coconut water has been used from time immemorial as an ayurvedic cure. One of the most common cures is a mixture of “aralu” powder (myrobalan) added to the water of one king coconut. This concoction acts as a very effective laxative. This blood purifying wonder was discovered centuries before the modern chemical and herbal alternatives. 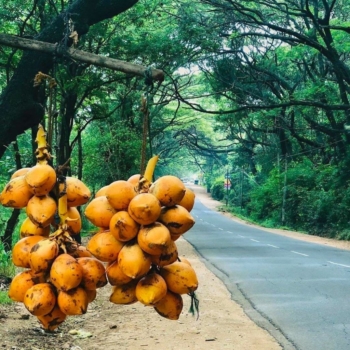 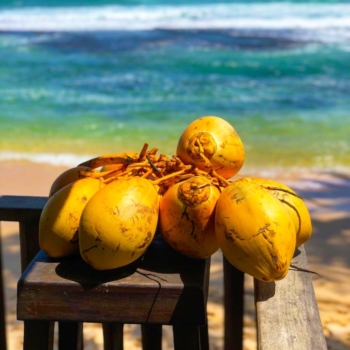 The king coconut is a well-known source of carbohydrates, vitamin E, iron, calcium and phosphorous. It also has a high dietary soluble fiber and appreciable amounts of protein and fat. In relation to all this, the king coconut is a pharmaceutical wonder that has a cure for almost every ailment. The natural high levels of potassium act as the ideal sports drink in replenishing the lost through sweat during exercise, allowing your muscles and verves to function at their peaks. The water of the king coconut is naturally sterile and therefore it is a good substitute for saline. In World War 2 both American and Japanese military doctors injected king coconut water into a patient’s veins instead of sterile glucose solutions.

Packaging King Coconut Water
Sri Lanka has now started to package the palatable king coconut water into tetra packs that are being exported. Ripened in luscious tropical climates and then carefully picked at optimum maturity by experienced local tree climbers, this delicious and refreshing water is then extracted and packed without any adding any flavors. Canned products can be stored for 2 years and bottled products can be stored for 1 year. King coconuts in Sri Lanka are indigenous to the island and are 100% pure. It does not contain added sugar, no preservatives or artificial flavoring. Only vitalizing, natural goodness. The king coconut is a well-known source of carbohydrates, vitamin E, iron, calcium and phosphorous. It also has a high dietary soluble fiber and appreciable amounts of protein and fat. In relation to all the king coconut is a pharmaceutical wonder that has a cure for almost every ailment, so it has a high market demand on the island as well as for the exporting.