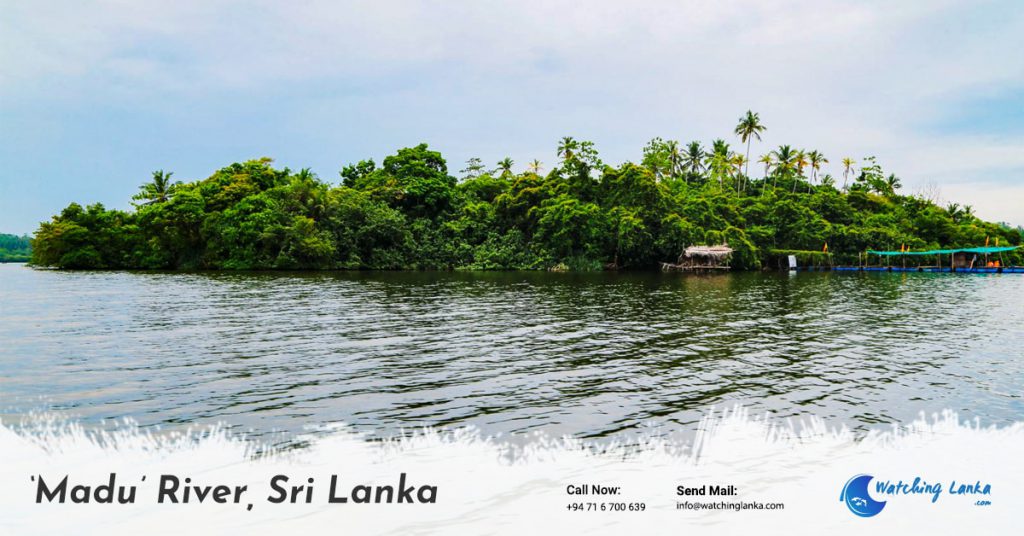 Madu River is located in the south of Sri Lanka near Galle. Madu Ganga is located in Balapitiya, Galle 80 km away from Colombo, close to Sri Lanka’s southern coastal belt. It was identified as a minor watercourse in Galle District, before widening into the Madu River Lake at Balapitiya. The river then flows for a further 4.4 km before draining into the Indian Ocean.

This wetland spread over 900 hectares of area and most of it covered with water. There are totally 64 islands in Madu River. The Madu River area surrounding the river are all swampy marshlands covered in mangrove forests. The forest covers over 61 hectares, that is over 150 acres. 14 of the 24 species of mangroves are found in this area. The most important thing is that the mangroves play a huge part in preventing erosion.

Its estuary and the many mangrove islets on it constitute a complex coastal wetland ecosystem. Madu River biodiversity zone is located in Balapitiya. It has high ecological, biological and aesthetic significance, being home to approximately 303 species of plants belonging to 95 families and to 248 species of animals. Among 300 species, 19 have been discovered as endemic species so far. The region continues to be a treasure trove to biologists and ecologists with many undiscovered species in the unreachable depths of the mangrove forests.

The plant life, in turn, has supported a large number of wildlife that depends on them. The largest animal in the region is the wild boar. There are other smaller animals such as monkeys, a variety of squirrels, etc. When it comes to birds, cormorants and kingfishers are a common sight. For avid bird watchers, the mangrove forests are a dream coming true. There are over 111 bird species identified to inhabit the region. There are 31 types of reptiles, namely snakes, lizards, and crocodiles. There are also over 50 kinds of butterflies and 25 kinds of mollusks found in the Madu River zone.

The beauty of Madu river also comprises with most of the soggy wetlands, the solid landmasses of the region mainly consists of islands. History states there used to be 64 islands along Madu River. However most seem to have sunk under the water, and as reported today there remain only 25 islands in Madu River. Of these islands, only 15 have a sizable landmass.

Some of the islands are inhabited, but all are covered in forests and shrubs. One of the larger inhabited islets, ‘Koth Duwa’, houses a Buddhist Temple that dates back to the days of the oldest kings of Sri Lanka. This Buddhist temple is the only construction located in this island. Smallest Island in here is called as “satha 5 duwa”. This island got it name because its shape is similar to older 5 cents coin. There is only a small devalaya located there.

The main source of economy for the rural villagers near Madu River region is the cinnamon industry. The freshly cinnamon is brought here to be peeled. By default, this also means that the best quality cinnamon can be purchased at bargain prices here. Those who are not in the cinnamon industry, earn from fishing or as boat guides. The fishermen either sit atop large branches planted in the water and fish using poles, or they tie nets between poles planted in the water to capture passing fish.

The Madu River boat safari is a popular activity that you have to definitely do if you are on a holiday tour to Sri Lanka. This unforgettable activity last for over two hours and gives a visitor a chance to travel the secretive passages through the mangrove forests and see the ecology. The boat ride is a wonderful way to take a closer look at this complex wetland ecosystem, being one of the last wetlands in Sri Lanka to contain a pristine mangrove forest.

Your journey will pass massive mangrove forests, glide under the canopy of the forest tunnels as they curve playfully towards the watercourse. Take into the unique biodiversity of the Madu River and its surrounding islands that boasts of hundreds of birds, plants, fish, and animals. This boat safari is the most popular activity in here which helps to improve the Madu River tourism in every aspect.

The Madu Ganga boat rides are popular among local and foreign visitors to the area. This ride gives you several memorable experiences and Madu River fish therapy is one of them. There are several fish spas located in within Balapitiya, Madu Ganga areas. They set up several artificial cage ponds in the natural river the doctor fish are grown there. You can get into the floating stage from your boat and sit and put your legs into the pond.

Hundreds of Fish comes and gently nibble the dead skin of your legs. They provide fish food also. Once you feed them, hundreds of them come and fight for it. The setup contains several ponds, they can support visitors from several boats also. There are different types of doctor fish available there to choose from. So, the Madu riverboat tours provide you with natural foot massage from hundreds of fish.

So, plan your visit to Madu River biodiversity area spends a great time with this locals. Sri Lanka is a marvelous paradise for all nature lovers throughout the world. Watching Lanka will provide you with all the opportunities to capture the most beautiful scenarios around here which draw hundreds of tourists from all over the world day by day.