Meemure, which is the hidden village among the mountains is an isolated village in the Central Province of Sri Lanka. It is situated at an altitude of 324 m above sea level. This village population is about 400. It is located on the boundary between the Kandy District and the Matale District in the Knuckles Range. Meemure received its name from the ‘Mee’ trees (as the villagers called them) that surrounded the place.

Meemure is about a 7-hour drive from Colombo. The main road is from Colombo 116 km through the city of Kandy. Then proceed along the Kandy-Mahiyangana road (A26) towards Mahiyangana. Turn left from Hunnasgiriya junction, 35km from Kandy. Then head towards the village of Loolwatte, which is 15km from Hunnasgiriya junction. It is about 15 km from Loolwatte to Meemure village.

Architecture is a key identity of Meemure’s. The villagers have been building eco-friendly homes using clay and Iluk for over three decades. But the most distinctive feature of their buildings is the boundary walls made of quartz. There is no cellular service in the village, but there is a CDMA telephone service. The villagers have no direct mail delivery service. A villager travels to Thapal Junction every day to exchange incoming and outgoing mail with a postman. Lakegala Mountain is situated in the village of Meemure. The residents of the village depend on several major crops including pepper, cardamom, rice, and ginger. 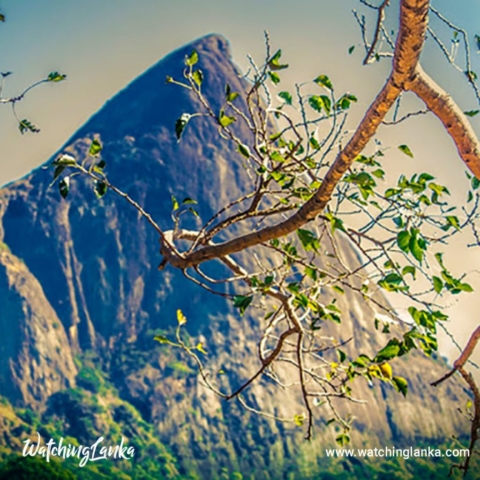 The village Meemure covers 700 acres. The Rawana Ella waterfall flows from the eastern slope of the Knuckles and the Heen River is located in this land. Most of the streams that run through Meemure start with knuckles. And they are more than 25 species of freshwater fishes live here. The vegetation is common to the Knuckles region and ranges from lowland semi-evergreen forests to Montana forests. More than 130 species of birds and also the Amphibians living in the desert also reported in this area. On the way from Colombo to Meemure, you can visit several sites. They are the Hulu Ganga, Victoria Reservoir, New Town of Teldenia, Dotalagula Forest and Botanical Gardens, Mini World’s End, Roberts Gap a place that the winds blew on the other side, Mimura and Lakegala Mountain where, according to legend, King Rawana lifted his Air Plane called Dhadu Monara.