The people of the past had the knowledge and ability to produce what they wanted locally using local raw materials. They knew the technology of making clay tiles and pottery using clay from the river valleys, the iron industry of making tools using iron, the carpentry industry of using wood, the textile industry of dyeing and weaving, and so on. Providing full state sponsorship for industrialization contributed to the development of technical design skills. The kings were even anxious to give the village to the artisans who had displayed their creative ability in the industries.

Due to the foreign occupation of Sri Lanka, due attention was paid to local industries. But we Sri Lankans are fortunate that our artisans have been able to preserve the traditional knowledge of the art from generation to generation without losing it. The pottery community, which inherited the pottery industry, one of the world’s most unique creative industries, was the world’s first civilized people. As the human race, which began with the ape, progressed day by day into civilization, the pottery community was able to make that journey faster, thanks to their prowess.

There are two types of clay used in the local pottery industry. Namely, kaolin clay and native clay. Kaolin clay is white in color. Kaolin clay is more compact and sticky. Therefore, minerals such as feldspar, silica sand, and quartz are mixed with kaolin clay in the manufacture of products from kaolin clay. In the case of native red clay, kaolin clay is washed away with rainwater and deposited on both sides of rivers and in dams. The clay thus deposited will eventually turn into red clay by mixing with plant and animal chemicals. Also known as melted, secondary clay. Local red clay deposits are also found along the Kelani and Gin rivers in Bangadeniya, Anuradhapura, and Kochchi Kade. Red clay is naturally formulated to make products so there is no need to mix other minerals. 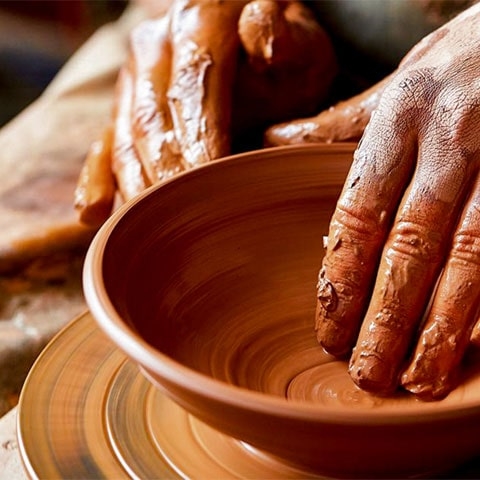 Potters use a tool called a Sakaporuwa to make goods. As the sakaporuwa spins faster, clay pots are formed. There are two types of arm sakaporuwa and foot sakaporuwa. Mounted on a sakaporuwa in the backyard, one man spins the sakaporuwa and the potter builds the pot. One can make goods on one’s own, as the foot activates the feet. The product is then left to dry and baked in an oven. The pottery was decorated using the three methods of carving, sealing, and applying liquid paintings. Especially the petals, birds, leaves, and floral designs are drawn or carved here. There are many types of pottery items. That is, furniture, roofing materials, art pottery, etc. can be pointed out.

Foreigners are more interested in clay ornaments than natives. A significant number of pottery items found in older homes can be seen. Unlike in the past, the pottery industry is facing a major crisis today. The threat posed by aluminum and plastic products greatly affects pottery. Matara, Negombo, Galle, Kelaniya, and Kegalle are the most popular areas in the pottery industry. The pottery industry in Sri Lanka is a traditional craft industry that has survived from time immemorial to the present day.