Seeta Amman Devalaya, dedicated to Goddess Sita, the consort of Goddess Rama, is located in the Nuwara Eliya Hills and is considered by Hindus to be the only devalaya in the world. It is located about 5 km from Nuwara Eliya towards Kandy. The soil in this place is black. According to the epic of the Ramayana, Hanumanji is believed to have burned this area before leaving Sri Lanka. Footprints of Lord Hanuman can still be seen near the canal near the Seeta Amman Temple.

According to the evidence of Ramayana in Sri Lanka, the goddess Seeta is believed to have been enslaved by King Ravana at this place. While Ashok is staying at the Vatican, there is a stream near the temple that runs down the hill to meet the needs of the goddess Sita. She is also said to have bathed in this stream. There were three statues in the canal about a century ago. Now there is a temple for Rama, Sita Devi, Lakshman, and Hanuman near this waterway. The interesting thing about the temple is that there are footpaths along the river, which are considered to be similar to Hanuman. Some are small and others are large, which is interpreted as an expression of Hanuman’s immense power to transform into any size. 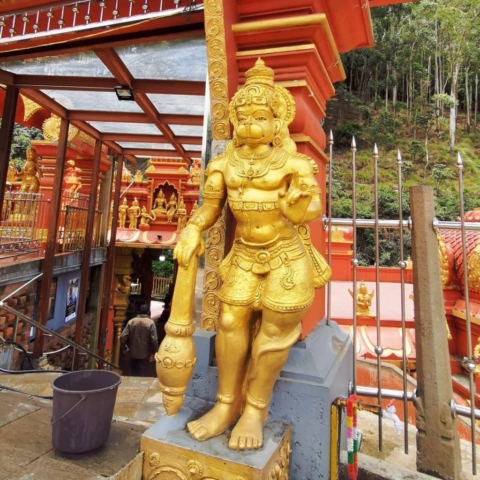 The Seeta Amman Kovil is open 365 days and there are two poojas for the temple. One is in the morning and the other in the evening. Morning time is from 8 a.m. to 1 p. m and evening time is from 2 p.m. to 6.30 p.m. Entrance is free for most Hindu temples and Ramayana sites in Sri Lanka, but you can donate a reasonable amount if you wish. If you are attending a pooja/ service, you will need to purchase a ticket (approximately 100 – 200 Sri Lankan Rupees). You can visit this place all year round as there is no entrance fee to the temple. Guests should dress decently when visiting the temple. A dress code similar to going to a Buddhist temple is very appropriate.