The Tissamaharama Temple, one of the four main monasteries in Sri Lanka, was consecrated by the Supreme Buddha himself. Tissamaharama Stupa is the largest stupa in the southern region measuring 156 feet and 550 feet in circumference. According to ancient chronicles, this stupa was built by King Kavantissa who ruled Ruhuna in the 1st century BC. It is believed that the stupa was built by the local Mahanaga king in the 3rd century BC and that King Kavantissa enlarged the temple.

Prominent resident Buddhist monks of this monastery are Arhant Mahasiva Thera, Arhant Dhammadinna Thera, and Arhant Pindapatika Tissa Thera. King Kavan Tissa, who started the Tissamaharama Temple, changed the Tissa Wewa to meet the water needs of the Tissamaharama Temple as well as to irrigate the surrounding area. Many ancient kings of Sri Lanka had given lands to the Tissamaharama Monastery for the welfare of the Buddhist monks who lived there. From the 3rd century to the 5th century, the monastery owned more than 18,000 acres of land. These lands were donated by the kings for the maintenance of the monastery and the stupa as well as for the needs of the resident monks. 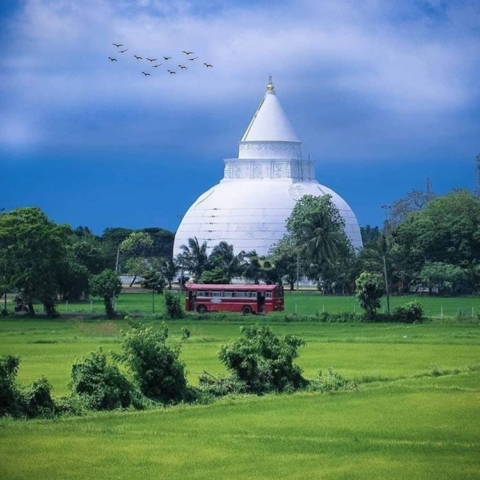 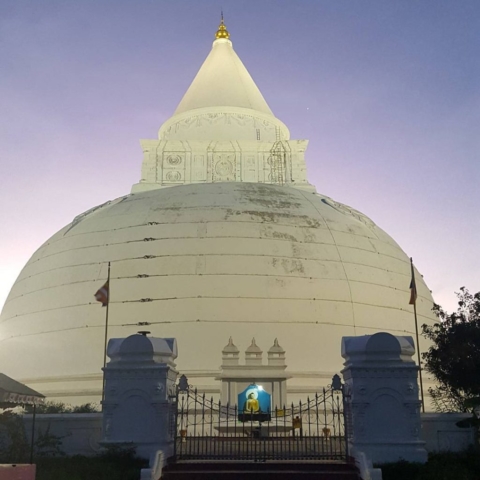 The Tissamaharama Stupa was built to commemorate the arrival of the Supreme Buddha at the same place where he spent time meditating with 500 monks. The ‘bubble-shaped’ stupa is built of bricks on a rectangular platform made of granite. King Kavan-Tissa received advice from Buddhist monks throughout the construction of the stupa. The relics mentioned in this stupa are subject to debate. According to the Mahavamsa, the front bone relics (Lalata relics) are enshrined in the Tissamaharam Stupa as the main relics. However, some believe that the relics in front of the Buddha were temporarily placed in the stupa but were later included in the Seruvila Mangala Maha Chethiya. A recent discovery of a Kirinda tower inscription reveals that the left tooth relic of the Supreme Buddha is also enshrined in this stupa.

Moreover, this ancient shrine is surrounded by lush greenery and stands out from any other building in the Hambantota area. History shows that this temple was one of the few temples that were regularly renovated by various kings in later kingdoms, even after being plundered by the invaders in India in the 13th century.