Udawalawe is a small town located in the southern part of the Ratnapura District in Sri Lanka. It is situated in close to the district’s boundary with the Hambantota District and Monaragala District. Udawalawe is located 69 km away from Ratnapura city. The town is also notable, because of the beauty of Udawalawe as well as the Udawalawa Reservoir, following the construction of a 3.9 km dam and a 6MW hydro-electric plant on the Walawe River. The reservoir is the 3rd largest reservoir in Sri Lanka.

The town is the main entry point into the Udawalawe National Park which is a major National Park in Sri Lanka. This place is undoubtedly one of the best places in Sri Lanka to see wild Asian Elephants throughout the year. Udawalawe National Park and the Elephant Transit Home are the best places to meet & greet these gentle giants at close proximity. The habitat surrounding at the reservoir includes marshes, the Walawe River and its tributaries, forests, and grasslands. Areas of open grassland are abundant as a result of former chena farming practices. There is a plantation of teak beyond the southern boundary, below the dam, which was planted before the declaration of the park.

Udawalawe National Park lies on the boundary of Sabaragamuwa and Uva Provinces in Sri Lanka. The national park was created to provide a sanctuary for wild animals displaced by the construction of the Udawalawe Reservoir on the Walawe River, as well as to protect the catchment of the reservoir. The reserve covers 30,821 hectares of land area. The park is 165 kilometers from Colombo and it is the closest national park to Colombo. Udawalawe is an important habitat for water birds and Sri Lankan elephants. It is a popular tourist destination which is the sixth largest animal sanctuary and the third most visited park in the country. Animals and Plants species recorded from the park include 94 plants, 21 fish, 12 amphibians, 33 reptiles, 184 birds (33 of which are migratory), and 43 mammals. Additionally, 135 species of butterflies are among the invertebrates found in biodiversity of Udawalawe. 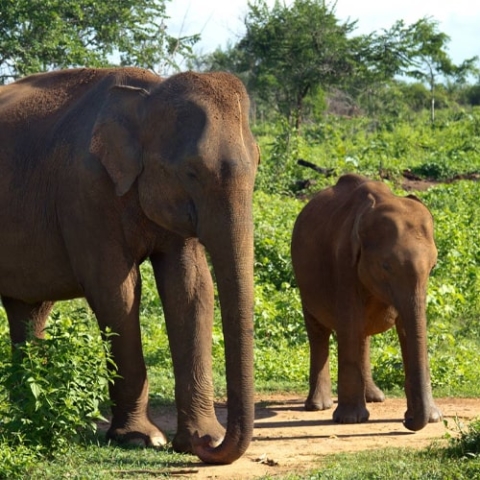 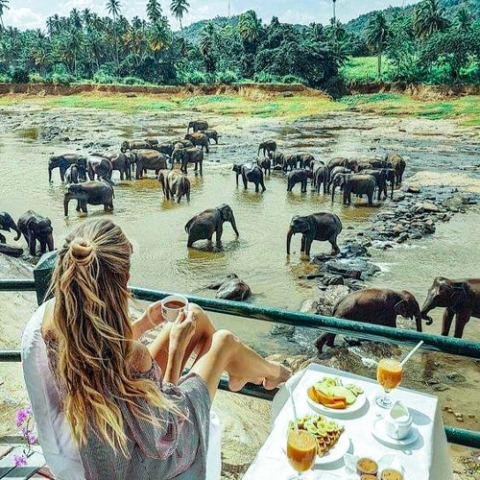 Udawalawe lies on the boundary of Sri Lanka’s wet and dry zones. Plains dominate the topography, though there are also some mountainous areas. The park has an annual rainfall of 1,500 millimeters most of which falls during the months of October to January and March to May. The average annual temperature is about 27–28 °C in Udawalawe Sri Lanka.

This awesome National Park is an important habitat for Sri Lankan elephants, which are relatively hard to see in its open habitats. It is an ideal place to see these majestic pachyderms in their natural surroundings. It is known that this place is a valuable national park in the world to observe the herds about 400 elephants in total are sustaining here. Many elephants are attracted to the park because of the Udawalawe reservoir, with a herd of about 250 believed to be permanently resident. Keeping company to the herds of elephants, the main attraction of the park is the Water Buffalo, Wildboar, Spotted Deer, Sambur Deer, Jackal, Samber, Black-naped Hare, mongooses, bandicoots, foxes, s the endemic Toque Macaque and Gray Langers. Sighting a Leopard and other smaller cats like Fishing cat & Jungle cat would be a bonus.

Udawalawe Park is also known as a good bird watching site in Sri Lanka. Bird lovers would get a wonderful opportunity to observe many different varieties of endemics such as Sri Lanka Spurfowl, red-faced malkoha, Sri Lanka grey hornbill, brown-capped babbler, and Sri Lanka junglefowl are among of the breeding resident birds.

The Udawalawe Elephant Transfer Home is an Elephant orphanage located within the Park. Established in 1995 by the Department of Wildlife Conservation, it is home to over 40 orphaned elephants. The orphaned calves and juveniles of the park are brought into the orphanage and raised with necessary care until such time as they could be released to their habitat.

Udawalawe Safari is something you should not miss if you are holidaying in Sri Lanka.

Why you should go on the Udawalawe safari;

Udawalawa sumptuously packed with a variety of beckoning tourist destinations, the Udawalawe National Park, and its surrounding community offers a regally splendid experience for each visitor. Apart from the major people attraction of Udawalawe, that is the Udawalawe National Park teeming with an abundance of exalting wildlife, the area includes several other attractions such as mesmerizing ruins, bungalows, and posthumously significant modern establishments such as the reservoir and hydroelectric power plant. It also has a unique collection of destinations, including limestone caves, natural hot water springs, and a colonial elephant ranch pave the way for an exquisite and captivating experience. In addition to these, the rivers, waterfalls, and other proofs of nature’s gallant glory are also
popular tourist destinations of the vicinity of the Udawalawe National Park. Each of these different destinations, blessed with the power to enchant countless tourists attraction of Udawalawe.