Archives / Under the British in Sri Lanka (before 1948) 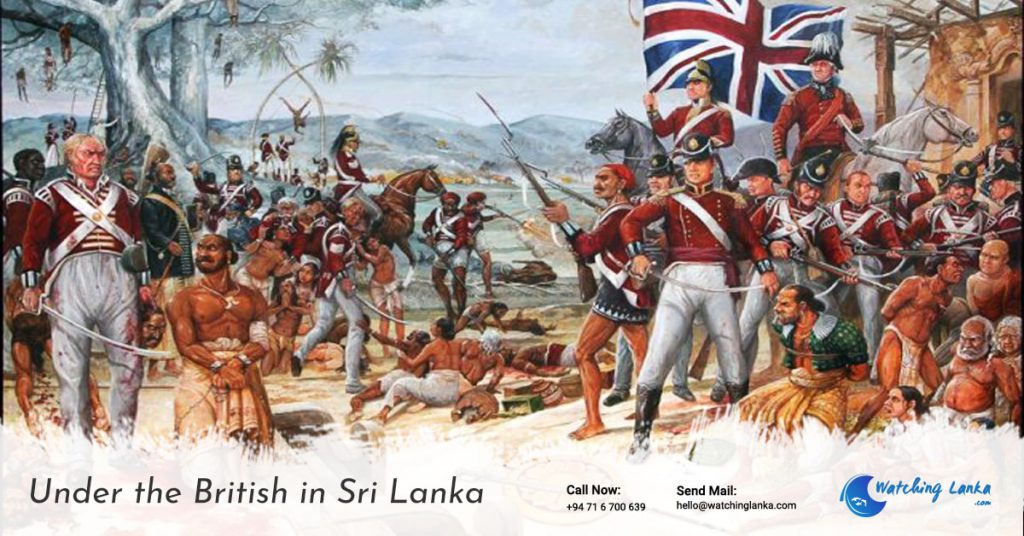 Sri Lanka has been a colony of three different European countries; Portugal, the Netherlands and Great Britain. All three left a mark in their own right, but Great Britain’s influence is the most noticeable, having been the last colonizer before the island’s independence. From language to food and sports, the Sri Lankan people are still living and practicing the British-style customs of their grandparents to some extent. When Sri Lanka was a British colony, between 1815 and 1948, it was called Ceylon, hence the name, Ceylon tea. British in Sri Lanka led to many different advantages as well as disadvantages.

British rule after the uva Rebellion

After the Uva Rebellion, the Kandyan peasantry was stripped of their lands by the Wastelands Ordinance. The British found that the uplands of Sri Lanka were very suited to coffee, tea, and rubber cultivation, and by the mid-19th century, Ceylon tea had become a staple of the British market, bringing great wealth to a small class of white tea planters. The British colonialists favored the semi-European Burghers, certain high-caste Sinhalese, and the Tamils who were mainly concentrated to the north of the country, exacerbating divisions and enmities which have survived ever since. Nevertheless, the British also introduced democratic elements to Sri Lanka for the first time in its history.

During the British in Sri Lanka, the country was dotted with coffee, cinnamon, and coconut plantations. Coffee was the main crop and the backbone of the colonial economy, but the occurrence of a leaf blight virtually wiped it out and the plantations quickly switched over to tea or rubber. Today Sri Lanka is the world’s second-largest tea exporter. British rule in Sri Lanka led to the development in many fields including language, infrastructure, tea culture, sports, trains, etc. If you travel to Sri Lanka you will be able to know how it had helped to the Sri Lankan culture and development.

The French revolution resulted in a major shake-up among the European powers and in 1796. During the Napoleonic Wars, Great Britain, fearing that French control of the Netherlands might deliver Sri Lanka to the French, occupied the coastal areas of the island with little difficulty in 1796. In 1802 the Dutch part of the island was ceded to Britain and became a crown colony. In 1803 the British invaded the Kingdom of Kandy in the 1st Kandyan War but were bloodily repulsed. In 1815 Kandy was occupied in the 2nd Kandyan War, ending Sri Lankan independence.

Many Kandyan nobles and peasants welcomed the British troops as liberators from the King’s despotism. Not a single British soldier was killed. The King and queen were captured and exiled, and the chiefs signed a document which became known as the Kandyan Convention of 1815. Sri Lanka became a Crown Colony and in 1818 a unified administration for the island was set up.

The Independence movement broke into the stream of “constitutionalists”, who sought independence by gradual modification of the status of Ceylon, and the more radical groups associated with the Colombo Youth League, the Labour movement of Goonasinghe, and the Jaffna Youth Congress. These organizations were the first to raise the cry of independence, or outright independence, following the Indian example, when Jawaharlal Nehru, Sarojini Naidu, and other Indian leaders visit Sri Lanka. The efforts of the constitutionalists led to the arrival of the reforms and the commission recommendations, which essentially upheld the draft constitution of the Board of ministers headed by D.S.Senanayake. The constitutionalists, led by D. S. Senanayake, succeeded in winning independence.

The promise of Dominion status and independence itself had been given by the Colonial Office. Between WW I and WW II, political stirrings started to push Sri Lanka towards eventual independence from Britain but in a considerably more peaceful and low-key manner than in India. At the end of WW II, it was evident that independence would welcome to Sri Lanka soon, in the wake of independence for Sri Lanka’s neighbor. In February 1948 Sri Lanka, or Ceylon as it was still known, became an independent member of the British Commonwealth. As of now, it is an independent country, people from all over the world tour of Sri Lanka to experience its greatest natural beauty and the splendid creatures.