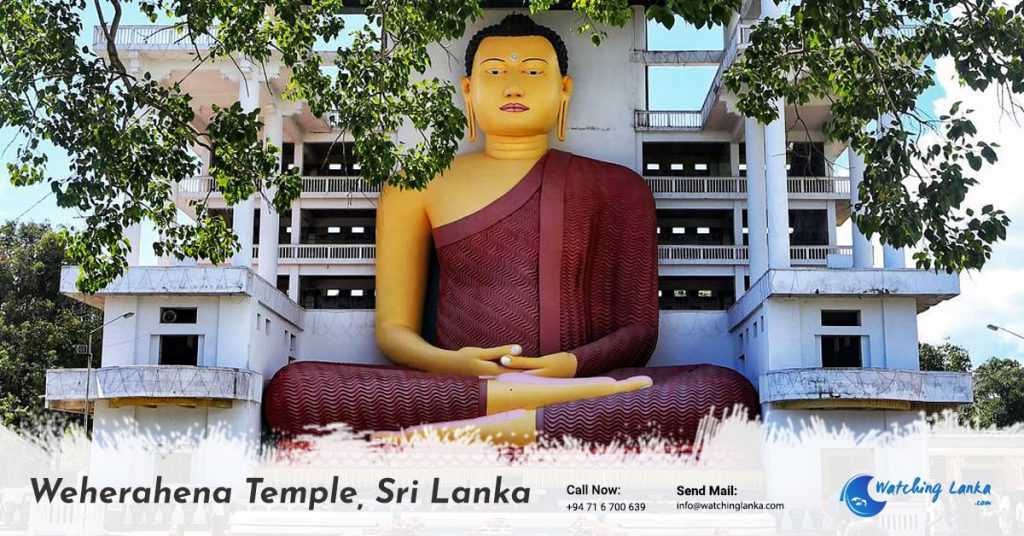 Matara is a very beautiful place in Sri Lanka that is situated in a calm and unique location. The views that can be seen from this place are spectacular and people enjoy visiting Matara and its beautiful landmarks. There is also a wide cultural aspect to the place and the religious traditions, as well as other major modern values, are followed side by side in this city. There are attractive beaches and well-established hotels that provide an established view of this city. Moreover, the temples and other religious places are also a special aspect of Matara as the Weherahena Buddhist Temple is one of a few temples with so much class and grace attached to it. There are many Buddhists who love to come to this temple for worship and spending some quality time at this serene place.

Weherahena temple is located on the Matara – Kekanadura road via Weherahena about 6km from Matara town. The temple complex, inclusive of all features spreads up to a vast land of three acres. It is also known as the first tunnel temple in the world. The colossal Buddha image which was built after the Anuradhapura and Polonnaruwa period is also a significant part of the temple. Although there is nothing of historical significance, the story of the temple is quite interesting.

The even though it is said this temple was adobe to arhath bikkus in ancient Sri Lanka, the history of Weherahena temple begins during the early part of the 20th century. The Most Rev. Parawahera Rewatha Thero was sent to Weherahena area in the early part of the century as a punishment by his teacher. Weherahena was just a mound of 1/2 acre of think Jungle with only a Bodhi Tree. It is said that Ven. Revatha Thero came only with a blanket, mattress and the bowl. He managed to get the villagers organized and built a small clay house for himself but soon came with a grand idea of building the largest Buddha statue in the world. He also wanted to build a tunnel temple. With the support of Anagarika Dharmapala, one of the leaders in Buddhist Revival of Sri Lanka and India, Anagarika Dharmapala kept the foundation stone to the temple in 1939 with great blessings. Once this was completed, 88 cubits height Buddha statue was established. The reason why this temple was historically kept as a hidden temple was the fact that Buddhists wanted to save it from outside interference and other many problems in this regard.

This temple consists of all the main features such as chetiya (pagoda), sacred Bo-tree and Samadhi Buddha statue. The walls of the tunnel temple are adorned with Buddha frescoes which exaggerate the beauty of Weherahena temple. According to the historical records, the tunnel temple frescoes narrate the Jathaka stories (legends). The enormous Buddha image which is 88 cubits in height is situated facing to East of the temple. It is a magnificent red clothed Buddha statue that is sitting outside the temple and presents a spectacular look and religious appeal to the onlookers. The courtyard has been constructed on the frontage of the statue. There are also two beautiful ponds in the middle of the yard. There are overall not relics or artifacts of the historic importance or significance of the value of Weherahena temple.

Many people are now concerned about this place as a mark of romanticism because the beautiful architecture and classy looks of this temple present a serene and breathtaking look. Many honeymoon couples come and visit the temple for taking blessings from the Buddha. Historically, the temple was built as an underground temple where people used to worship but now it has emerged as one of the most important and prime examples of modernity. Due to all these characteristics, Weherahena tourist attraction now has emerged to a huge amount in many ways.