Archives / Why Do You Need Whale Watching at Mirissa 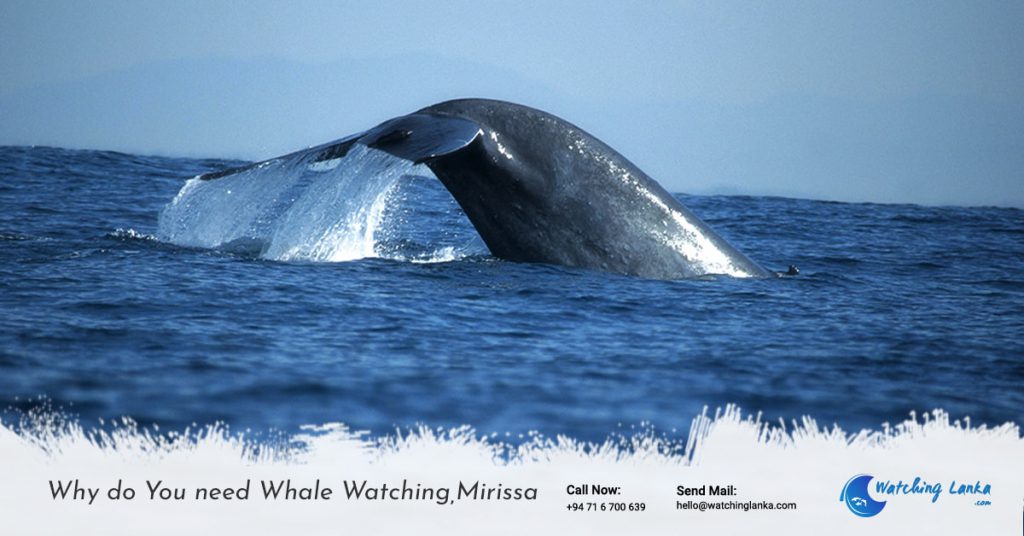 WatchingLanka is one of the best activities in the world to see one of the only recorded resident blue whale colonies in their natural habitat. Dolphins are regularly spotted on whale watching trips organized from Mirissa and Dondra head on the south coast of Sri Lanka. Here is a rare opportunity to experience the thrill of being close and connected with the wondrous and highly intelligent inhabitants of the best ocean whale watching zone. According to the BBC documentary 30, Blue Whales were sighted in a single day.

Whale and Dolphin watching is an easy sport that you can take up during the months of December to April. You can use private boat whale watching with an experienced best guide whale watching who will help you to have a good time watching whales and dolphins off the coast of Mirissa. Pods of Dolphins can be seen accompanying boats frequently during the said months. Blue whale watching can be viewed near Mirissa beach in large numbers frequent the coastline of Sri Lanka during this period.Although it gives a splendid experience to all the visitors there are some issues faced by the people as well as the poor whales and dolphins in the south sea coast.

Reasons why you need whale watching in Mirissa

Sri Lanka is said to be the world’s only country in which you can see the largest land mammal (the elephant) and the largest water mammal (the blue whale), so it made whale watching in Mirissa a priority. Thus you can found yourselves at Mirissa harbor at 7 am being herded onto a two-story boat with 80 other people. When riding starts you see, the boat is one of about 20 heading out that morning, each packed to the gills with tourists.

A short while later, you’ll encounter a delightful group of dolphins. By the time the whales showed up, the tension in the air is taut. What if you couldn’t get to it fast enough? What if the whales appeared on the other side? What if other passenger got a good photo and you couldn’t? These are clearly the questions preying on people’s minds at this moment.

On a serious note, the whales are majestic of course but it will difficult to enjoy the experience, not only because the boat is crowded but because the whales are crowded too. Most whale watching operators in Mirissa follow international guidelines for approaching the mammals, but the sheer volume of boats is simply unnatural. The natural habitats of the poor whales are totally being disturbed due to this unnecessary amount of boats sailing throughout the coast. The smaller boats and more conscientious operators offer a better service for sure but they still contribute to the overcrowding.

The Benefits for you

Whale watching in Mirissa can be a force for good. It can foster education and conservation, and contribute sustainably to the local economy but only if it’s moderated and regulated. Sri Lanka Coast Guard has increased efforts in monitoring whale watching in Mirissa to uphold the Sea Mammals Observation, Regulation and Control Regulations, which specify the distances to be maintained, methods of approach, and maximum boat speeds to ensure that the whales’ natural habitat is not disturbed. Sadly, the rules and regulations are not being moderated perfectly. With so many boats each at carrying capacity converging on a daily basis, the whales will not remain blissfully unaware of the intrusion further.