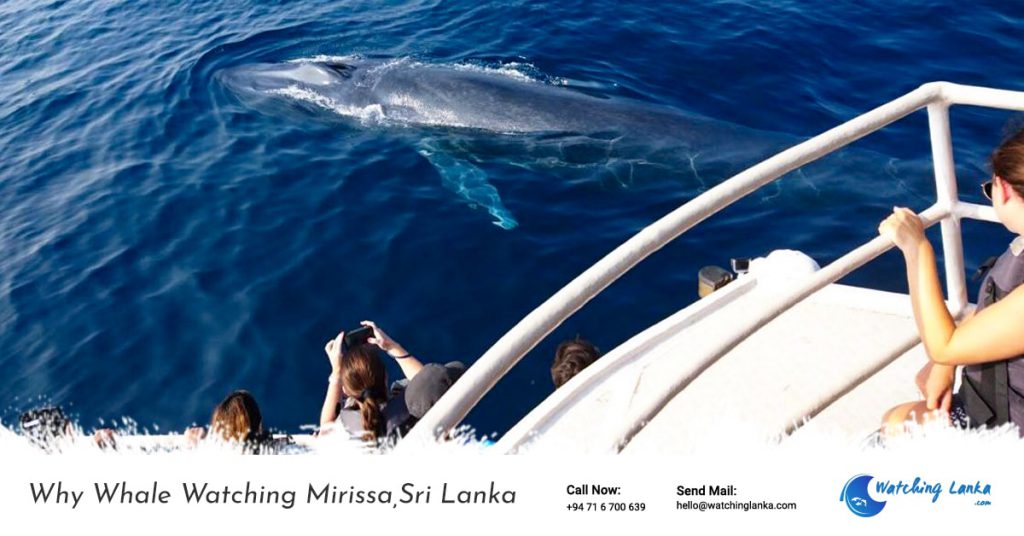 The blue whale is the largest animal on earth and ever known to exist. Sri Lanka is famous for the giant blue whale. The ever smiling, mischievous dolphins will put on a show while some of the oldest and the largest sea creatures, the humpback, and the blue whales, will nonchalantly glide past you when you embark on a whale/ dolphin watching excursion. The best place to spot whale watching is in Mirissa, a small tourist town on Sri Lanka’s south coast.

Strong whale watching ocean zones in Sri Lanka are the Southern, Eastern or the Western coasts. The size and rapid growth of the industry has led to complex and continuing debates with the whaling industry about the best use of whales as a natural resource.

The whale watching season in Sri Lanka runs from November to April / May, as during the rest of the year, the waters will be too rough because of the Monsoon. Best months for sightings are April and March. At peak season the chance for sightings is 90%. The sea is calm in the morning and rough in the afternoon. The whale watching trips start very early in the morning between 6 and the latest 7.

Whale and Dolphin watching in Mirissa is one of the famous activities for the tourists who tour Sri Lanka. It is an easy sport that you can take up during the months of December to April. You can make a whale watching tour to Mirissa thereafter experienced local guides may show you a good time in watching whales and dolphins off the coast of Mirissa.

Now having gained international recognition as a hot-spot for whale and dolphin watching, the Southernmost Coast of Sri Lanka is known for its numerous sightings of both dolphins and whales. Many species of dolphin such as the spinner, striped, bottlenose and the spotted have been spotted in our waters.

Blue and Sperm Whale watching in large numbers frequent the coastline of Lanka during this period and can be viewed near Mirissa beach, and just close proximity to the hotel. Blue whales are the largest creatures on earth, measuring up to 30 meters in length, and luckily enough for you, they live only a few miles off the South whale watching ocean zone. The art of spotting the whales comes down to mastering their breathing behaviour.

As peak season is between December and April, there is a 95% chance of spotting a Sperm Whale and also possibly a Blue Whale, as their migration route is just off the Dondra Point. Watching Lanka will help you to see these marvellous behaviours of the world’s largest animal. Tour Sri Lanka to have the experiences in each and every step you walk in.