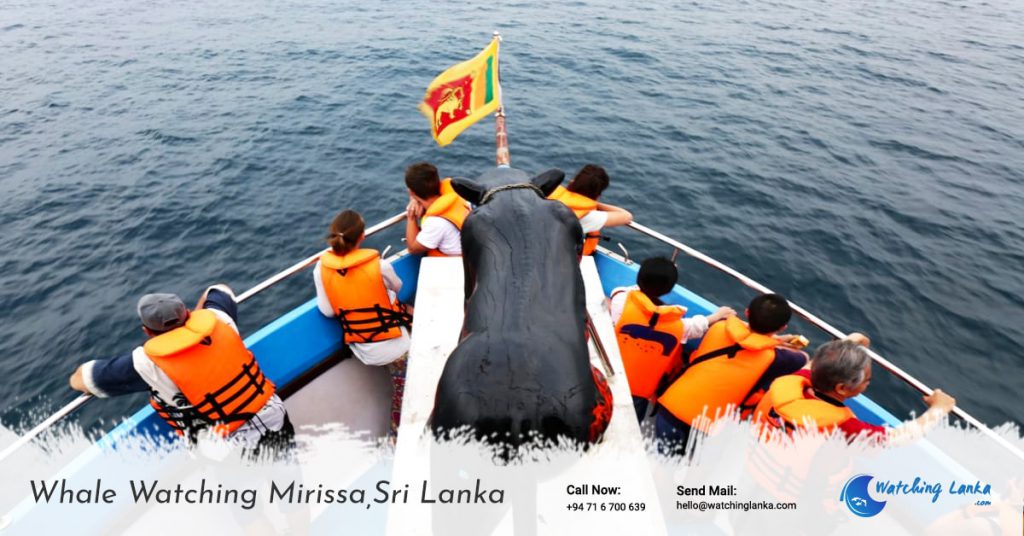 Mirissa situated in the southern coast of Sri Lanka is the closest point to the continental shelf and on the migratory route of Whales as they move closer to the warm waters of the Indian Ocean, primarily to breed. Tour Sri Lanka to come to watch, study and photograph the largest creatures on earth, the Whales at Dondra Point in Mirissa, a destination famed for some of the finest ocean whale watching zone in the world.

The best whale watching season is between November and April each year. Whale watching in Mirissa is one of the most exciting water activities you can do in Sri Lanka during your holiday. Mirissa is the best place to start your whale and dolphin-watching tour in Sri Lanka. You are able to arrange Whale Watching Trips off Dondra Point and Mirissa Fisheries Harbour in a fully insured purpose-built private whale-watching boat which will last for 3 to 5 hours. Experienced best local guides for whale watching will show you a good time in watching whales and dolphins off the coast of Mirissa.

During your journey to Mirissa on the south coast, you can see several other whale species, dolphins and other marine life also. Killer whales, Sperm whales, Bride whales and Pigmy killer whales are the different kind’s whales we can see. Blue and Sperm Whale watching in large numbers frequent the coastline of Lanka during this period and can be viewed near Mirissa beach. Spinner dolphins, Bottled nosed dolphins, and Riso dolphins are the various types in dolphin watching. Also Green back turtle, Whale shark, Flying fish and Tuna fish are other marine species can be seen in some days.

With the Mirissa whale watching being in full swing and many local and foreign tourists who watching Lanka gathering to the Mirissa harbor, The Sri Lanka Coast Guards had increased their vigilance in monitoring the implementation of Sea Mammals Observation, Regulation, and Control Regulations. To ensure that the Regulations are adhered to by boat operators and tourists engaged in whale and dolphin watching, Coast Guards had been observing whale watching activities in Mirissa since last year.

They also make sure that the boat operators, crew, and the tourists abide the safety precautions and regulations before and during their tour of observation. Travel Sri Lanka and take back beautiful memories of whale watching Mirissa, the gentle giants of the ocean on the south coast as it’s a once-in-lifetime experience.