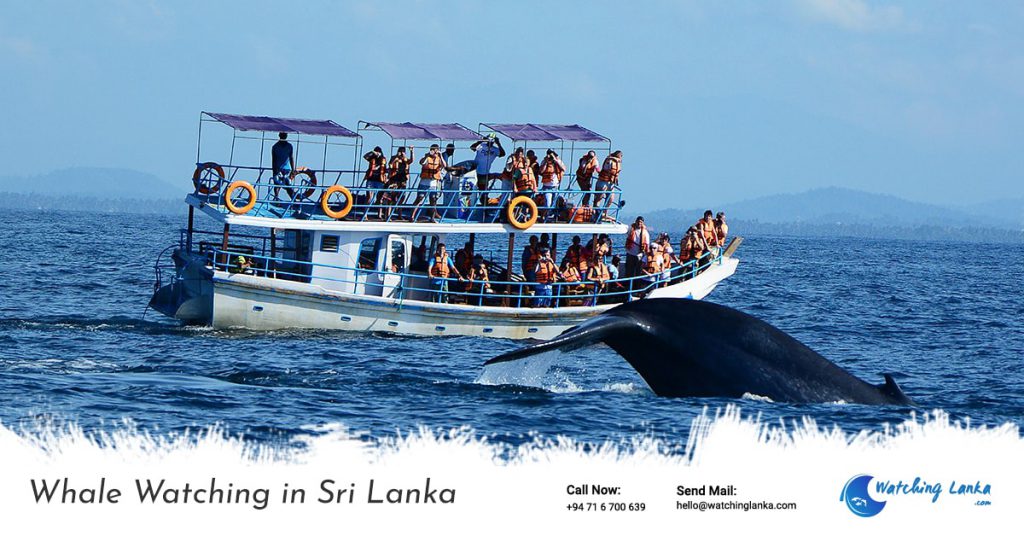 Whale watching is the practice of observing whales and dolphins in their natural habitat. Whale watching is mostly a recreational activity, but it can also serve scientific and/or educational purposes. The size and rapid growth of the industry has led to complex and continuing debates with the whaling industry about the best use of whales as a natural resource.

Whales are warm-blooded, marine mammals which are of the order Cetacea. They breathe air, give birth to live young and are found in all the oceans of the world. There are 80 species of whales that have been identified in all oceans, while 26 of them have been recorded up to date in and around the seas of Sri Lanka.

The ever smiling, mischievous dolphins will put on a show while some of the oldest and the largest sea creatures, the humpback, and the blue whales, will nonchalantly glide past you when you embark on a whale/ dolphin watching excursion off the Southern, Eastern or the West coast of Sri Lanka. The ideal locations for whale watching would be Dondra Point (accessible from Galle, Hikkaduwa, and Mirissa) and Trincomalee while the sea off Kalpitiya teems with an abundance of dolphins. Watching Lanka at each and every place mentioned above will provide you the opportunities for whale watching.

The whale watching season in Lanka runs from November to April / May, as during the rest of the year, the waters will be too rough because of the Monsoon. The best place to spot whales is in Mirissa, a small tourist town on Sri Lanka’s south coast, popular for surfing and famous for whale watching.

Sri Lanka is becoming a major spot for watching Whales and Dolphins. Most people throughout the world tour Sri Lanka for this. Ample of accommodation options are available as Dondra point can be reached easily from Hikkaduwa, Galle, Unawatuna, Weligama, Mirissa and Tangalle which are popular beach locations in Sri Lanka. Mirissa is the closest point to Dondra Point with good accommodation options.

The whale watching the season in Mirissa runs from November through to April and July to September, with the best chance of sightings from December to March because of the sea is not rough. You will have a chance of spotting Blue Whales, Fin Whales and even Sperm whales in these waters along with a variety of dolphins.

The Whales and Dolphins come to this region to feed on the Small fish that comes to the Indian Ocean. There are three pods (families) of Whales that return to this area every year and they consist of approximately 40 – 60 whales. These Whales are matriarchal meaning that the eldest female leads the group.

Whale watching Eastern coast season in Sri Lanka is from May to Oct, Trincomalee, 257km East of Colombo has become one of the largest animals to inhabit the earth. With resident and migratory colonies being spotted off the island’s south-west coast, Sri Lanka is fast becoming a top spot to watch Blue Whales, Sperm Whales, and Dolphins.

Kalpitiya is becoming very popular for its presence of Sperm Whales and an occasional Blue Whale alone is a world-class attraction of marine life. Whales are regularly seen around the Kalpitiya Peninsula. Interestingly it was only from around February 2010 that Kalpitiya is finally considered as a destination to catch the sight of the majestic whale.